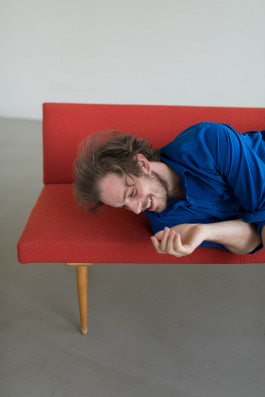 A performer, teacher, and creator working mainly in the field of contemporary dance and physical theatre. In his artistic work, he draws from the endless stream of energy, which during his artistic development was shaped by several dance styles and aesthetic forms. His constant passion for spontaneity and explosiveness of movement as an artistic expression inspires him to explore various techniques linking civil, expressive, and virtuoso forms. He is interested in transcendence of art into other disciplines and sciences, as well as in light insights into challenging topics. In recent years, he has been focusing on partner work and site-specific performances, which were also the topics of his bachelor's and master's theses. His artistic direction is currently framed by art in non-theatrical space. As a performer, he is interested in authenticity and direct communication with the spectator.

During the studies of dance interpretation and didactics of modern dance at the Academy of Performing Arts, his path got a professional character. While learning about the various forms of popular and independent art during his studies, he co-founded (with other students) mimoOs collective, which for many years shaped his work in the field of contemporary dance. They co-created original works of art (Moving Mountains, Another Song in Silence). In addition, he was part of projects with Slovak and foreign artists (A. Lachký - Night Illusion, P. Šavel, Y. Korec, M. Poláková, T. Procházka – Sensory Understanding, S. Pregrad - Diaries of Touch...). He also considers it important to cooperate with generationally related artists (Budzáková, Szegho, Gallinová, Balák, Schogl).

After obtaining his master's degree at the Academy of Performing Arts, he continued his studies at the prestigious SEAD school in Salzburg, where he learned from renowned dance artists (V. Osojnik, M. Ronda, E. Torroja, I. Spencer, J. Hamilton, E. Ernesto, D. Freeman, J. Michellod, M. Blanaru). As part of the final project, he interpreted a solo of M. Herich "solo for mr. Folk". Studying abroad helped him define his field of interest and find new impulses for physical, mental, and artistic development.

He collaborates with the international ensemble of physical theatre in Prague - Farm in the Cave (Ephemera, Commander, Refuge...). He also collaborates with the Viennese association Artemporis (Strings) and is the author of a site-specific project "passing/station". He is the founder of the Orava region festival of dance and movement – Tanečno, which he has been organizing for the fifth year in his hometown, Námestovo.

He participated in the European forum Alpbach 2019, where he assisted in the seminar "It does matter where", led by Viennese choreographer Willi Dorner. He also took part in the China-CEEC summer exchange training camp in the Chinese provinces of Guizhu and Guiang.

He is currently working on research in the creation of a solo performance (gentle man), site-specific happenings in collaboration with Námestovo Theatre (site&self), as well as on a duet called Pass in. As a teacher he leads workshops in Slovakia and abroad.