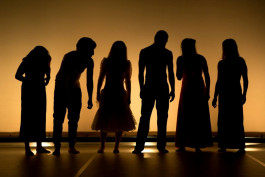 Night Illusion is a celebration of dance, youth, energy, and sense of simplicity and wit. Six dancers create six characters in a surreal world of an isolated settlement of which they are the only inhabitants. They are content because life in the countryside is a balm to their souls. They stick to their rituals and do not lack anything else to make them happy. They hope they will never have to move anywhere.